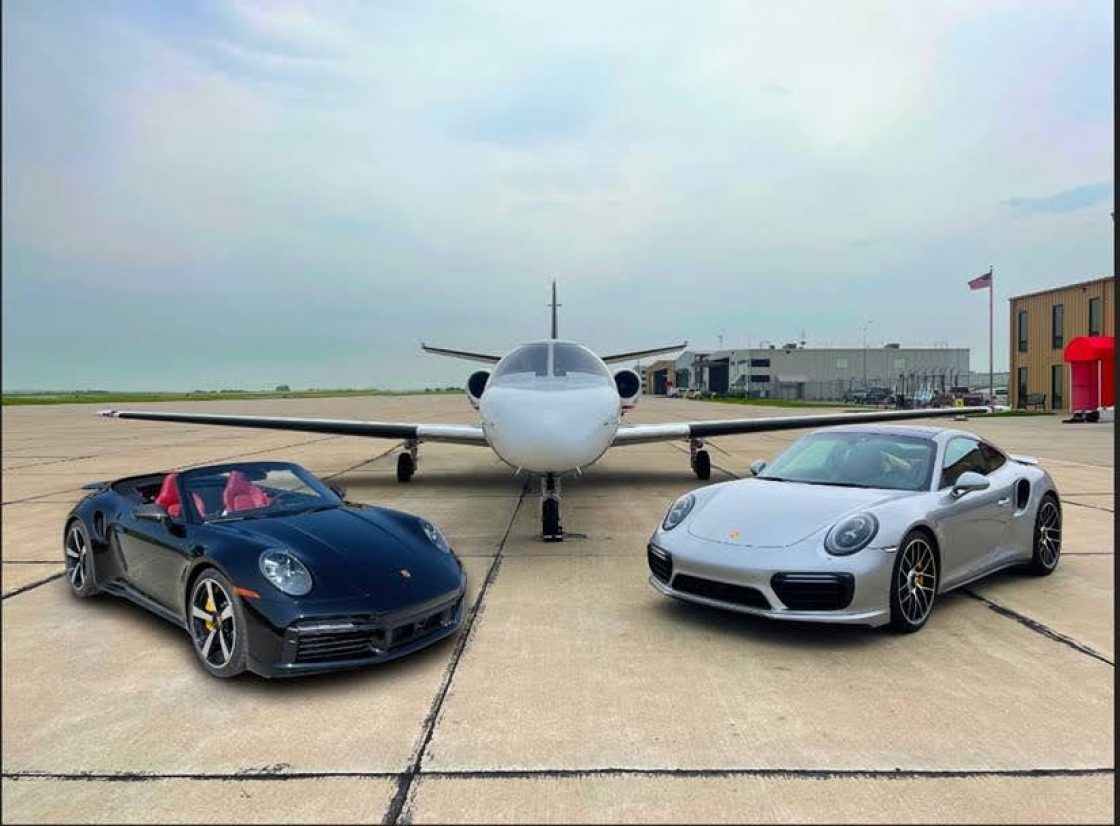 As Enjoyed by: Keith & Ardith Ziegenbein

HOW IT ALL BEGAN…

Back in the fall of 2015 our 911 Targa S arrived and the next day we headed out for eastern Canada and Maine on its maiden voyage; we’d never been there and wanted to see it.

That was such a fun trip that we did it again in March of 2017 but with a new twist: we took planes, trains and automobiles after skiing in Colorado, to L.A. where we picked up our 991 GT Silver 911 Turbo S coupe and drove it back home to Omaha. That was a real hoot; my first drive in a turbo!

This time the destination was the Porsche Experience Center in Atlanta. The car we had ordered in February was a 911 Turbo S, 2021 Cabriolet, 992, in Jet Black Metallic paint. It was to be ready for pickup July 15th.

As this trip was going to occur over our 47th wedding anniversary we decided to make it truly unforgettable. We hired a Citation private jet and flew to Atlanta and bypassed all of the otherwise Covid hassle. The jet was a blast! Comparatively speaking, like riding on a go-cart.

When we arrived at the Overland hotel at the experience center we ran right over to the museum and track area. The next day we would be experiencing the track ourselves and we wanted to get the “lay of the land” so to speak.

That evening we enjoyed a great supper at the Apron restaurant (on site) with a business associate of ours. The service was exceptional for the entire experience.

Finally our car was ready for our pickup. This was quite an affair seeing the car draped with black cloth and suddenly revealed right before our eyes. We were all smiles of course, even if it was a little dramatic!

Everything didn’t go perfectly as expected. The window sticker was ever so slightly torn whilst being removed and PEC’s Kathy Le insisted on printing us a new one. Really not an issue for us, but she sent us a new one anyway!

Another PEC highlight was the restoration shop area where I met Ralph Strack, the manager. We had a nice long discussion about 914 issues as we now have 20,000 original miles on the 1973, 914 2.0 I bought new before we were married. Then he showed me a burnt orange 914 waiting for their magic to happen.

The next morning we were off to visit some dear friends of ours who also own Ten Pines Airbnb, Mike and Melodie Vaden in Ringgold, Georgia.

Being a farm boy I tried to help Mike with an issue they were having with their John Deere tractor and mower. Now I was in my element!

Georgia was simply beautiful and the weather cooperated very nicely with temperatures between 70 and 90° which is the perfect range for top down driving.

Next stop was the Biltmore mansion and hotel in Asheville, NC. We enjoy studying historical building construction methods and human behaviors and the Biltmore is an excellent place to do just that. From the weight room to the slate roof it was all very interesting. And the ice-cream mid afternoon topped it all off!

The “Tail Of The Dragon” drive was next up. We stayed at the quaint Tapoco Lodge near Robbinsville, NC.

Driving the Dragon was a joy. We didn’t particularly hurry either, but the curves of the road are banked appropriately so as to facilitate a sporty drive that’s not excessive if you don’t want it to be. The trees were simply beautiful although sometimes nearly oppressive in letting any sun through.

Nonetheless the ~107 hp per cylinder 911 swam through the twists and turns in an easy stride just waiting for the chance to open it up a little.

Then onto Nashville where we stayed at the historic Hermitage Hotel downtown.

At the Hermitage the main valet attendant, Carlton, wanted to keep our black beauty in a single parking space visible to all who came along. What could I say, he got a great tip!

Once we left Nashville we decided to high-ball it home.

So we blew through St. Louis to a single night stay in Columbia, MO and then drove straight back to Omaha. All in all we got some 28 mpg. Not bad for 640 hp.

All in all the weather was fantastic and this time of year it could have been anything but. This made the top down driving a real joy. And the fact the top can be opened/closed up to 35mph made this option readily accessible, even after your drive had just begun, which is often when one realizes the top should be down! A feature the Targa couldn’t match.

After this 1500 mile cruise what would I change? Not much:

My most significant critique would be that Porsche hopefully adds detents to the cruise control lever for surer 5 mph up/down adjustments. This would be not only easier to operate but much safer, too. Then with my phone holder occupying the center cup holder, a third cup holder would be nice; but this would be asking for the moon I’m sure!

Home at last, safe and sound.

The 992, 911 Turbo S Cab ran beautifully. It rode more solid and forgiving than any of my 40 previous cars had ever exhibited.  Despite exhibiting itself as a great touring car; the quickness, power and torque… never seemed to stop😎